LASIK Technology That’s Out Of This World! 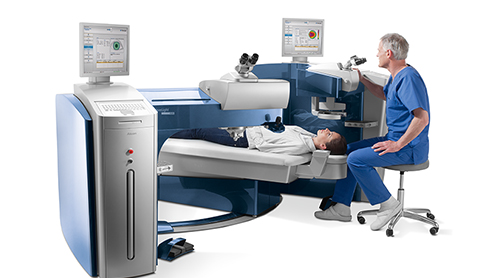 We’ve been amazed by the recent images and audio of NASA’s Mars Exploration Program.  Interestingly, over the decades, NASA’s scientists and engineers have been responsible for many inventions and technological breakthroughs that help us here on Earth too!  These include products such as artificial limbs, wireless headphones, CAT scans, athletic shoes, home insulation, baby formula, camera phones and many more.

But, did you know that LASIK technology also originated at the space agency?

NASA’s Eye Tracking Device technology was used to track astronauts’ eyes during their time spent in space and to evaluate how weightlessness directly affects the human’s frame of reference.  Today this technology is widely used in LASIK surgery.

Tracking the eye’s position is essential in performing the LASIK procedure.  At VISTAeyes, our WaveLight EX500 Excimer Laser has a built-in high-speed eye tracking device that runs at 1,050 Hz and monitors the movement of the eye at the rate of 500 times per second so the laser beam stays on target during the treatment to deliver the highest levels of safety.  This means that even when the patient’s eye moves slightly, the treatment remains perfectly centred.  If, at any time, the eye moves out of range, or if a large movement occurs (such as cough or sneeze), the laser will stop completely and wait for the eye to move back into position.

So, how does LASIK eye surgery work?

Firstly, an ultra-thin, hinged flap of corneal tissue is made using a femtosecond laser.  At VISTAeyes, we use the Wavelight FS200 Femtosecond Laser.  This blade-free technology can create a flap in just 10 seconds per eye.   This flap is lifted in order to access the deeper layers of the cornea.  Secondly, the Wavelight EX500 Excimer Laser applies a customised, computer-generated pattern to permanently reshape the cornea.   During the application of the treatment, the high-speed eye tracker monitors the eye’s position to ensure precise and accurate placement of the treatment.  At the completion of the treatment, the flap is replaced where it bonds to the eye without the needs for stitches.  Most patients can resume normal activities, including driving, the day following their surgery.

At VISTAeyes, as well as investing in state-of-the-art technology and training, we are continually keeping abreast of the latest advances in eye surgery, both internationally and in Australia, to provide patients with the highest standards available – right here on Earth!

This entry was posted on Friday, March 19th, 2021 at 1:55 pm and is filed under In the News. You can follow any responses to this entry through the RSS 2.0 feed. Both comments and pings are currently closed.
MENU
Contact Peninsula Eye Centre