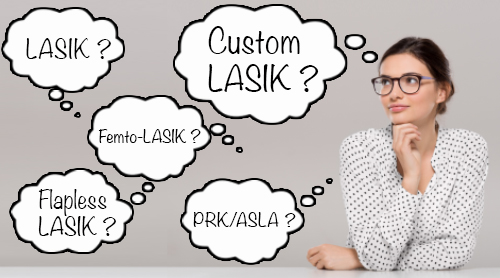 LASIK was a breakthrough in laser eye surgery.  It was first performed by Dr Pallikaris in Crete in 1989.  I performed the first LASIK procedures in Melbourne in 1996.

It was an absolute game changer for laser eye surgeons from only having one option to offer our patients: ALSA (also known as PRK).    LASIK allowed us to offer another type of laser eye surgery and it provided patients with a much faster recovery.  That is not to say the modern version of ASLA is not a good procedure in some elected cases.  LASIK, however, if the patient is suitable, is far more convenient for the patient.

LASIK always involves the creation of a corneal flap.  This flap creation was first invented by Dr Barraquer in Colombia in 1962.  It was the combination of the flap and the excimer laser (used in ASLA) that made all the difference.

There are different types of LASIK available in Melbourne currently and we’ve received feedback from many patients that the various meanings and marketing tactics circulating in our industry about LASIK are difficult to decode.  There are claims of “Lasik without a flap”, “Flapless Lasik”, “No-Cut Lasik” being used. Let me be clear: there are no such medical procedures!  These terms refer to surface treatments (and using just one laser) such as ASLA (PRK) – not LASIK.  LASIK necessarily has a flap by definition and always involves the use of two lasers.

The word “LASIK”, always referred to in correct medical terms in capitals, stands for Laser In Situ Keratomileusis.  LASIK treats short-sightedness (myopia), long-sightedness (hyperopia) and astigmatism, eliminating the need for glasses or contact lenses.  LASIK is the most commonly performed laser eye surgery procedure available today, with over 50 million cases performed worldwide.  The convenience of LASIK is the reason for its popularity.  LASIK provides a fast recovery, allowing patients to return to normal activities more quickly.

LASIK always involves the use of two lasers.  The first laser creates the corneal flap and the second laser (Excimer Laser) re-shapes the cornea and corrects vision.   LASIK can be divided into different types in two ways:

1st Laser: Bladeless vs Manual with a Blade

The most popular method to create the corneal flap performed today is blade-less – this is performed using a femtosecond laser (also known as Femto LASIK).

Manual with a blade

Another method, which is rarely used today, is the older method, where the flap is created using an ultra-sharp oscillating blade (also known as Microkeratome or Keratome LASIK).  At VISTAeyes, we do not perform Keratome LASIK, as this is an outdated method.

It’s important to distinguish between the different types of LASIK (and indeed ALSA), by the pattern of treatment performed with the excimer laser: the laser that reshapes the cornea and corrects vision. The treatments can either be customised or non-customised.

Some clinics incorrectly refer to customised or personalised LASIK treatment based only on the prescription data collected.  This is not customised treatment, this is the Standard or Traditional LASIK, which does not address aberrations. Other clinics simply change the cornea just by what is in the patients’ glasses. This is not enough anymore.  VISTAeyes is the only clinic in Melbourne to offer Customised LASIK. 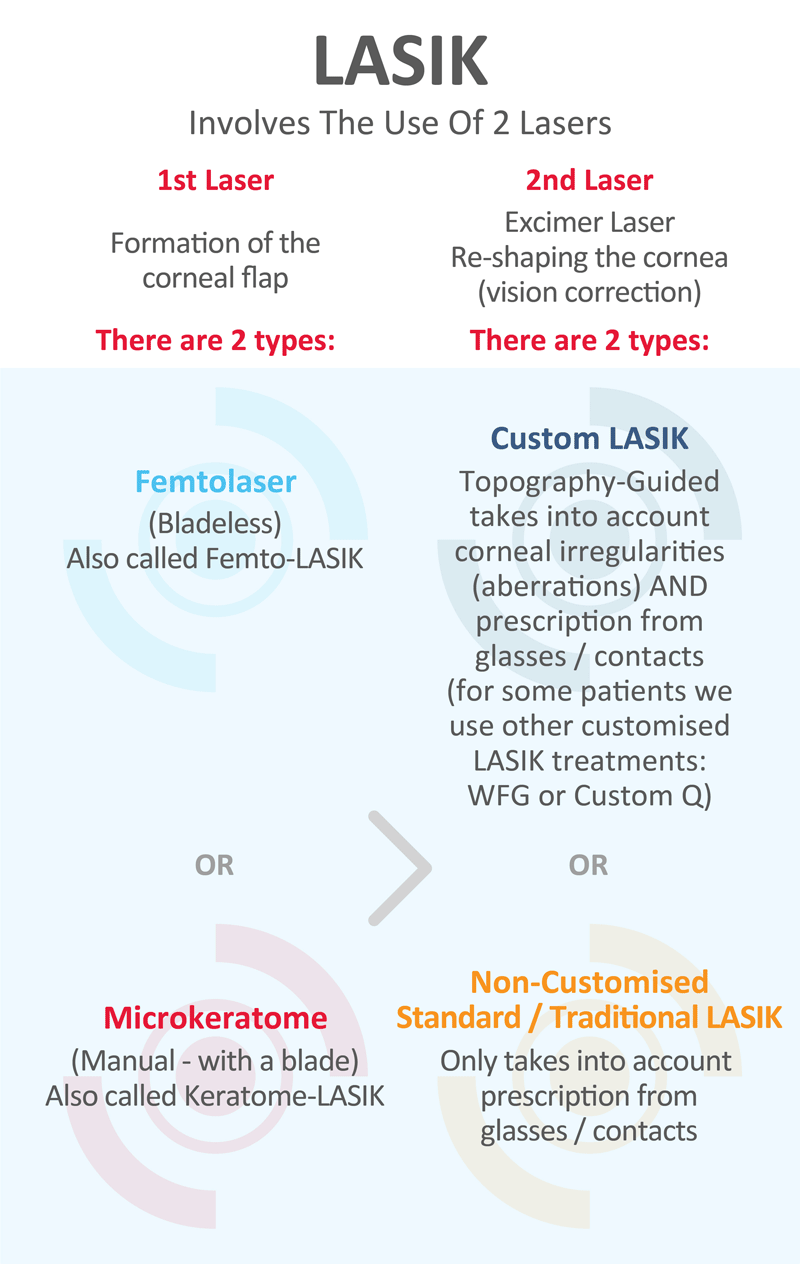 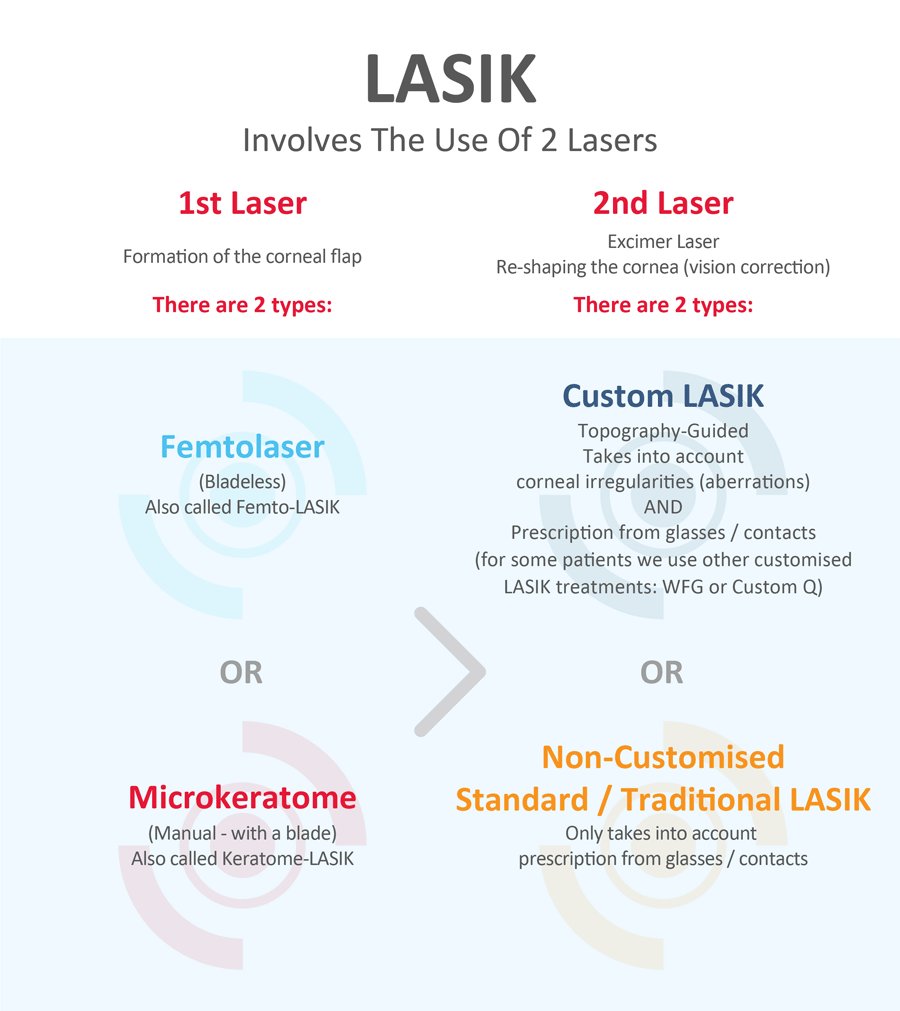 This is customisation taken to the next level.  It is a personalised vision correction treatment, which uses a computerised device called a corneal topographer to measure a patient’s individual cornea, examining specific corneal irregularities (called aberrations) and calculating how to best improve their vision (in excess of simply correcting what is in the patients’ glasses).  It would appear to have better results in providing lower aberrations, accurate outcomes and improved quality of vision.  This procedure, sometimes called Contoura, is the main LASIK mode we use at VISTAeyes.  We have pioneered the procedure and I have presented on it several times in Australia and overseas.  Admittedly, it is more complex and costly for surgeons to perform topography-guided LASIK than the non-customised LASIK, but we believe the benefits, to those patients who are suitable, are worth it.

We have been performing WFG for nearly 20 years now. It involves the use of a costly piece of equipment called an aberrometer. It not only accurately measures the prescription but also the aberrations. The complex treatment required is transferred to the excimer laser.

This is another type of customisation we use at our clinic. It especially targets one sort of aberration, known as spherical aberration.

Types of Non-Customised or Standard/Traditional LASIK

This is the non-customised form of LASIK.  It makes no attempt to address aberrations. As a result, they are usually increased. A recent study of WFO LASIK with the Schwind laser1 revealed an increase of 100% in aberrations. This can’t help the final quality of vision.  Most other clinics only offer the Non-Customised or Standard / Traditional LASIK because it is less time consuming and cheaper to administer than Customised LASIK.

There is another laser eye procedure called SMILE laser eye surgery.  We do not perform SMILE at VISTAeyes, as it cannot be customised, probably because precision is not adequate and certainly not as precise as an excimer laser used in LASIK.  SMILE is over a decade old and there have been little or no technological advances. 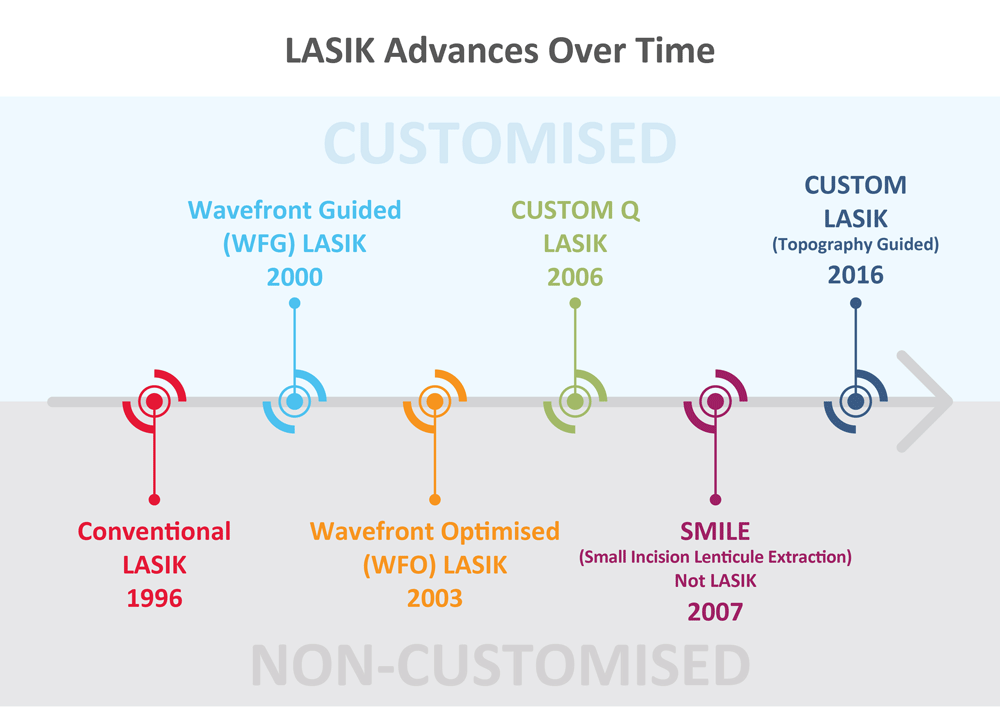 Taking into account all the laser eye technology available today, Custom LASIK shows the most promise as the way forward for achieving the best quality of vision.   It is by far the most advanced procedure available today including WFO LASIK, SMILE or “LASIK without a flap”.

What is Custom LASIK?

This entry was posted on Friday, July 3rd, 2020 at 11:38 am and is filed under In the News. You can follow any responses to this entry through the RSS 2.0 feed. Both comments and pings are currently closed.
MENU
Contact Peninsula Eye Centre